March for a Future that Works 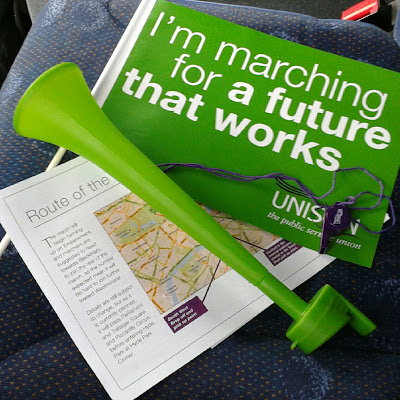 Yesterday I took part in the TUC March for a Future that Works in London.  (My elder daughter was marching in Glasgow!).  I'm a member of UNISON and have taken part in a couple of smaller marches in Bristol, but this was the first time I'd joined in with other unions in London.

We travelled up to London by coach and were transferred to Blackfriars by boat which was an unexpected treat.  The boat dropped us off at the end of the march so we had to make our way up the outside of the marchers to join the UNISON contingent at the front.  As we hurried up the line I was moved both by the numbers and the variety of unions represented.  There were teachers, firefighters, musicians, students, actors, civil servants and all manner of public service workers.  There were adults, children, babies in buggies and people in wheelchairs.  There were choirs, drummers and a pipe band.  There were balloons, inflatables, placards, banners and effigies.  People were chanting, singing, and blowing whistle and vuvuzelas.  In fact, if you hadn't known that this was a protest against the government's austerity policies you could have been forgiven for thinking that you were in the midst of a carnival. 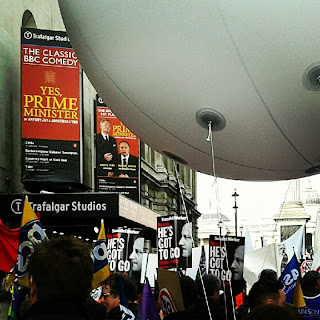 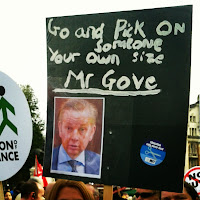 The march proceeded peacefully, if not quietly, along the Embankment, past Westminster, up Whitehall, skirted Trafalgar Square, up Regent Street, and along Piccadilly to Hyde Park.  There was a strong police presence, particularly outside Fortnum and Mason and the Ritz, but the officers were relaxed and friendly and obviously not expecting any real trouble. 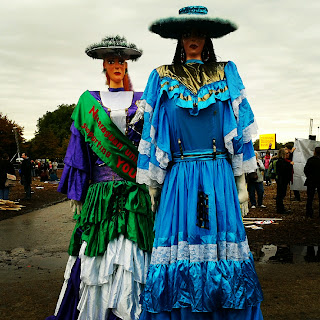 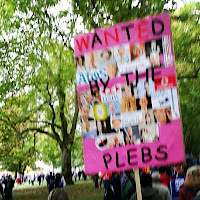 We were among the first to arrive at the rally and were in a good position at the front to hear the speeches which, I am relieved to say, were of a higher calibre than I've experience at other rallies.  I was particularly impressed by Kumi Naidoo of Greenpeace who spoke of the impact government policy is having on the environment.  The crowd listened politely, clapping and cheering enthusiastically, but were not altogether impressed with Ed Milliband or Brendan Barber, both of whom were booed and heckled by sections of the audience.  I am disappointed that the Labour leadership do not have any real hope to offer us in this crisis.  In fact it sometimes feels that, rather than us all being in this together, we're very much on our own. 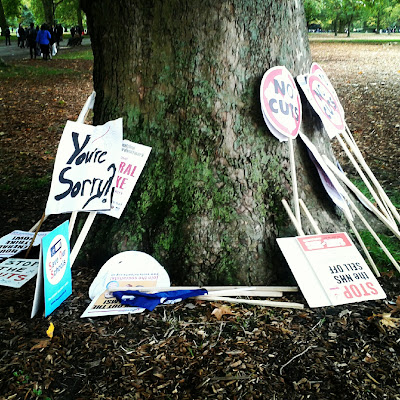 I'd travelled up without any family or friends and had second thoughts about whether I should go, but I'm so glad I did.  I took comfort from the visible demonstration that I am not alone in my real concern at the effect this coalition government is having on our society, and reassurance that there are hundreds and thousands of ordinary people out there who are prepared to do something about it.
Posted by just Gai at 9:51 pm